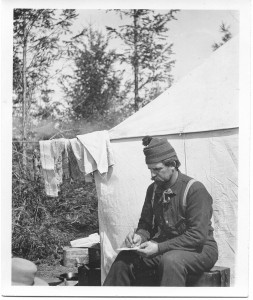 Hamlin Garland (1860-1940), American novelist, short story writer, poet and essayist, won the Pultizer Prize for biography in 1922 for “A Daughter of the Middle Border.”

The Eldon Hill Collection focuses on U. S. writer Hamlin Garland (1860-1940). Garland gradually won a place for himself in the literary set of Boston and Cambridge and was influenced by the novelist William Dean Howells. In 1891, one of his most respected books, Main-Travelled Roads, was published, and the autobiographical A Son of the Middle Border appeared in 1917. A sequel to that autobiography won the 1922 Pulitzer Prize.

Eldon Hill was a major 20th century scholar of Garland’s works and a professor of English at Miami University for 34 years. After his death in 1987, his widow, Mary, arranged for his collection to be donated to the Walter Havighurst Special Collections. The collection is held in 6 archival boxes and includes over 130 volumes. This includes correspondences between Hill & Garland, autographed & annotated copies of Garland’s work, Garland’s letters and other documents, and Hill’s own research on Garland’s works.

This collection is currently being processed. Please contact Special Collections to learn more.