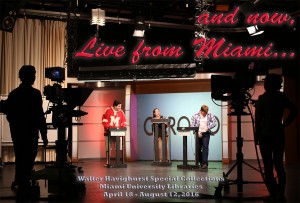 I am very excited to announce the first exhibit being held in the new Special Collections & Archives space! As we move closer to finishing with both the renovations and the Archives move to the top floor of King Library, it is a great pleasure for me to be able to curate this exhibit drawing from both Special Collections & the Miami University Archives. The exhibit, which runs from today, April 18th, through August 12th, celebrates over 50 years of students in broadcasting here at Miami. Recordings and artifacts of broadcasts, as well as photos of many of the students who worked on them, are central to the exhibit. Clips from television programs and full radio broadcasts are also a part of the exhibit. 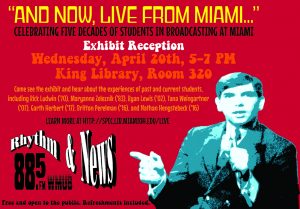 Our opening reception is Wednesday, April 20th, from 5-7 pm in King Library room 320. The reception is free and open to the public and will include a panel of current and former students, a chance to see the exhibit, and refreshments.

Beyond our department, I have also received tremendous support from the Department of Media, Journalism, & Film in Williams Hall and many former employees of the WMUB radio station as well as alumni. In particular, I would like to thank: