This Saturday marks the 125th Anniversary of Miami football.  Back on December 8, 1888 Miami University played its very first football game and it was against none other than our “friends” down the road, the University of Cincinnati.  The game ended 0-0, but marked the first of what would be the second longest rivalry in division 1 football.  The only rivalry that predates Miami-Cincinnati is North Carolina-Wake Forest which was first played a few months earlier in 1888, on October 18.  The Miami-Cincinnati rivalry is also the 4th most played rivalry.  Below is a list of the rivalries with over 110 meetings between the teams. 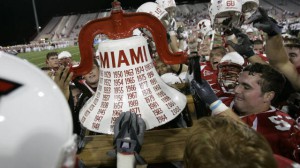 Victory Bell after a Miami win

The game between Miami an Cincinnati is better known as the “Battle for the Bell” or the “Battle for the Victory Bell, with the winner receiving the Victory Bell and keeping it until the teams meet again the following year.  Since 1909, the game has been played every season with the exception of 1943 and 1944, when World War II was at its height.  As you can see from the chart above, Miami is currently winning the series 59-51-7, though Cincinnati has won the last seven meetings.  The tradition of the Victory Bell began in the 1890’s when a group of Cincinnati fans “borrowed” the bell from the original Harrison Hall on Miami’s campus. The bell went to the winner of the game over the next 30 years until it disappeared during the 1930’s. The original bell reappeared in 1946 but was retired and is currently being preserved. The current trophy is a replica of the original bell.

In addition to starting one of the most played rivalries in college football, that game in 1888 was also the start of Miami’s football program.  During these 125 years Miami has accomplished a lot.  They are currently tied for 24th (with Clemson) in all-time NCAA wins among the 125 Division 1 programs with 688 wins.  Other accomplishments in the first 125 years of Miami football: