It’s April 23rd, and that means a very Happy Shakespeare Day to everyone!

As part of the celebrations commemorating the 399th anniversary of his death (we thought about putting this off another year but just couldn’t wait), we are very pleased to announce a complete reboot of our digital folios collection. This new collection includes every page from all four Folios of the Bard’s work as well as miscellanea found with the collection, and can be found at http://digital.lib.MiamiOH.edu/folios.

As some of you might recall, our set of folios was first digitized in 2008 and we were among the earliest to make the Shakespeare Folios available in full online. However, given a combination of technical issues and evolving standards & technology, it was decided that all four folios be re-digitized and a new collection launched.

The digitization itself took place this January, when our Graduate Assistant Dana Bogart and I reshot each folio using an Atiz Bookdrive stand with a pair of Nikon EOS 6D cameras we had just acquired late last year. Each folio was completed in a single session of approximately 3-4 hours.

Some were easier than others, with the First Folio being particularly difficult to capture due to the tightness of the binding. Our copy of the First Folio also has had some missing pages supplied in facsimile, most notably the entirety of Twelfth Night. These replacements run much closer to the inner margin making it very difficult to get a good shot. Another interesting and unique aspect of our particular set of folios is the handwritten notes found in some of them, particularly the Second Folio which features in some plays a meticulous comparison to the First Folio.

In addition to the folios themselves, some clippings about these particular copies of the folios (as well as others for comparison) are included as part of the collection. These were a much simpler scanning prospect using a regular desktop flatbed scanner. Once the photos were taken, I cropped and organized the images into individual plays to be added to the digital collection. 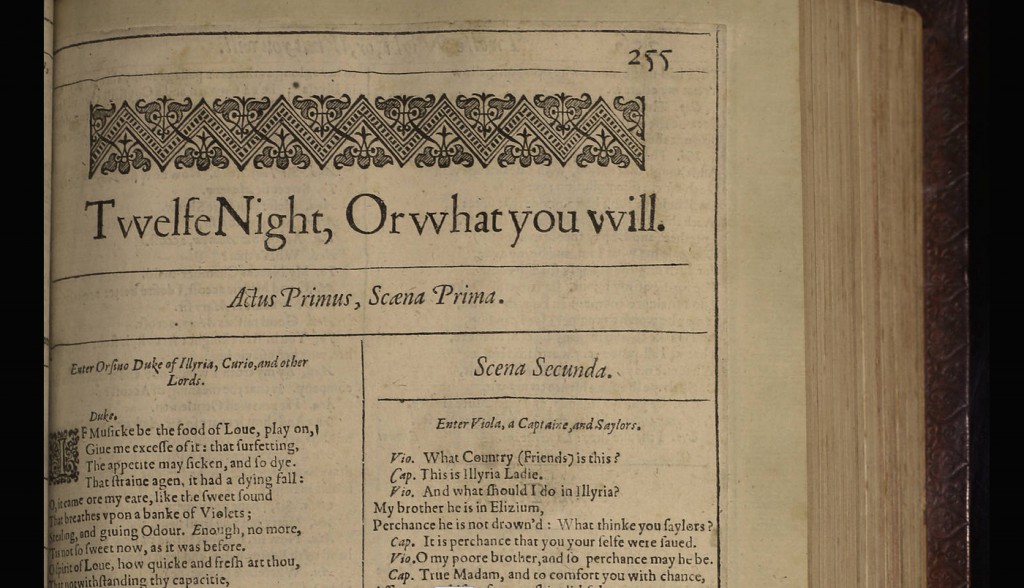 Note how close the printing is to the inner margin, as well as the expanded page that was created when these pages were inserted.

In addition to images with better technology, relaunching the collection has allowed us to move it fully into our current CONTENTdm 6 instance, which includes a more easily navigable interface, allowing the user to zoom in and navigate around each page within the viewport on the page. A “Page-Flip View” is also included as part of CONTENTdm, which simulates the effect of holding the book open and turning the pages.

A comparison of the old (left) and new (right) collection interfaces. 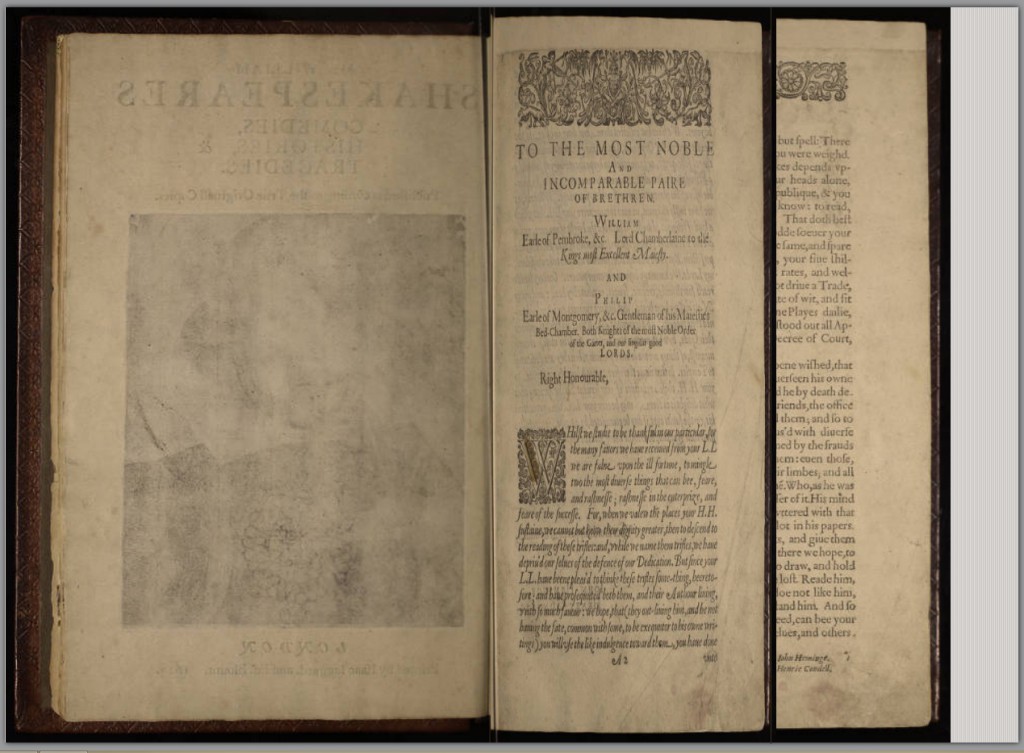 The “Page-Flip View” with a page in the process of turning.

With the help of the clippings found with the folios, our own department records, and the 2003 census of First Folios by Anthony James West, I was able to gather some information about the provenance of these particular copies. According to West’s The Shakespeare First Folio: A New Worldwide Census of First Folios, our First Folio was first sold by the bookseller Henry George Bohn to Chandos Leigh (1791-185), who passed it down to his son William Henry Leigh (1824-1850). The so-called ‘Lord Leigh set’ of Folios was sold to Frederick S. Peck by Gabriel Wells in 1927. It was then purchased by Dr. O. O. Fisher in 1947. Fisher was a Miami University alumnus (Class of ’09) and avid book collector, who donated all four folios to Miami University. All but our Third Folio come from the Lord Leigh set and include the bookplates of Leigh and Peck. Our Third Folio holds the bookplate of John Gribbel. It is interesting to note that, according to West’s census, a First Folio with the Gribbel bookplate was also sold in 1947.

The works of William Shakespeare are among the most (if they are not the most) famous, influential, and beautiful works of the English language, and even the folios themselves represent a unique point in history. The Oxford Companion to Shakespeare writes:

The folio as a format was reserved for only the most expensive and prestigious volumes by the leading theologians, philosophers and historians of the day. A folio devoted to plays was unprecedented. The printing of the 907-page First Folio began early in 1622 and took nearly two years to complete…The first folio was so successful and demand apparently so great that a second edition was required within less than a decade. The Second Folio was a carefully corrected page-for-page reprint of the first that made hundreds of minor changes in the text, the majority of which have been accepted by modern editors.

The First Folio of Shakespeare’s works is one of only five books to have ever been recorded in a worldwide census (interestingly, we have another one of the five in our collection: Audubon’s Birds of America). But though the First Folio is the most famous and prized of the four, the Third Folio is arguably the rarest – it is said that most unsold copies were destroyed during the Great Fire of London in 1666. Regardless, all four are incredible works of art and we are truly privileged here at Miami to have them. It has been a pleasure and honor to work with them.