Most of the books in the literary societies collection are leather bound volumes that pre-date 1840. The collection is currently in the process of being re-housed and prepped for cataloging. This past winter, we noticed that many of the volumes had developed white blooms along their spines and outer edges. My initial reaction was to assume that we had developed a mold infestation. Luckily, that was not the case.

Spue is usually found in areas of the leather exposed to air, such as spines and edges

Through a little more research and observation, it was discovered that the white blooms were in fact a substance known as “spue.” According to the Alaska State Museum’s blog, “What’s That White Stuff?” spue is a “white bloom resulting from fats, oils and waxes and may be referred to in the literature as fatty bloom, or fatty spue (spew). These terms all refer to the migration of fats/oils through the leather material that crystallize on the surface in the presence of air.”

After determining our white bloom outbreak was not mold, but spue, we dug a little deeper for more information. According to an article written by William Mclean, “Leather ‘Bloom’ – Causes and Remedies” (Skin Deep, vol. 2, Autumn 1996):

“Crystalline surface deposits known in the leather trade as “spues”, arise because of the migration towards the surface of unbound, mobile components from within the leather. They are unsightly but are not, generally speaking, harmful and they often come about as a result of cyclical changes in environmental conditions, i.e. fluctuating temperature or humidity. Broadly, these deposits may be subdivided into salt spues and waxy spues. The classical method of differentiating is by applying a local source of heat, for example a match flame, which will usually cause a waxy spue to melt and disappear – at least temporarily, whereas a salt spue will be unaffected.”

Using this information, we were able to determine our spue was of the fatty or waxy variety. But how did it form and why did it appear so suddenly on such a large collection of books? According to Leather International’s Mechanisms involved in the formation of fatty spues: 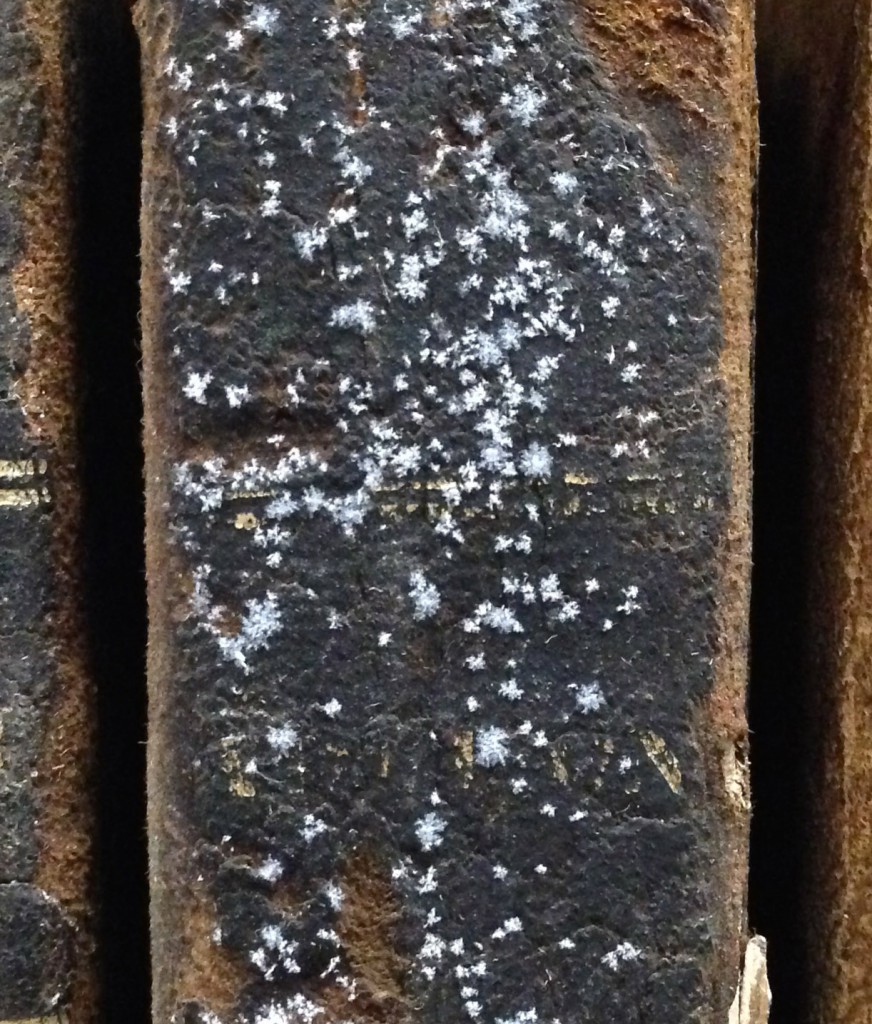 Close up of fatty spue

“There are different opinions about the formation mechanism of the spues, although everybody agrees on the differences in the displacement of different fat components into the leather. Papers on the subject agree that the fatty acids and their esters initially form as a dissolved material in the liquid phase, with the liquidic oil acting as a solvent at room temperature. They come from natural fats and from fatliquors added in the process. This solution becomes oversaturated due to a high concentration of fatty acids and esters and/or to a fall in the room temperature. As a consequence the fats migrate to the outer surfaces of the leather and crystallisation of the fatty acids and/or glycerides occurs. The concentration of the acids and esters is due to a differential solubility of the components in the leather. The liquid oils are either partially or totally reabsorbed in the fibre network while the crystallised fatty acids and glycerides remain on the surface.”

While we can’t be 100% sure of the cause, the appearance of our fatty spue did correspond with a sudden and prolonged drop in temperature (during the winter) of our special collections closed stacks area due to mechanical failure in our environmental control systems. What is interesting to note is that spue was not found on any other volumes other than the ones belonging to the Erodelphian Literary Society and Miami Union Literary Society collection. It is possible that these volumes were treated with leather dressings or other substances that at one point were thought to prolong the life of the leather object. According to “What’s That White Stuff” this is known as secondary bloom, or “bloom caused by the application of fats and oils to the surface of the leather” as opposed to fats and oils added while processing the leather. For centuries people have been applying leather dressings to bound volumes and other objects, however it has become clear that many of these substances can cause damage. 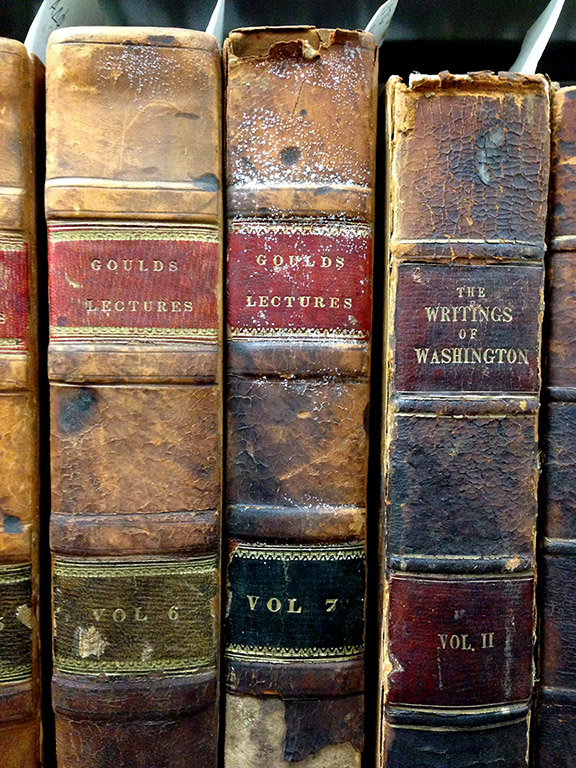 We have since removed the spue from our materials, and while spue is quite easily cleaned from the leather surface, research suggests there is no guarantee it will not reoccur.