Off to College: Passages from Student Diaries in Special Collections

This week we are witnessing the return of students to Miami’s campus for the start of the new academic year, along with the arrival of first year students. It is an exciting time. It can also be a stressful event. I thought I would celebrate this “move-in” week by sharing the experiences of two early Miami students as they left home to attend college. These accounts are taken from their diaries, which are housed in our Special Collections. 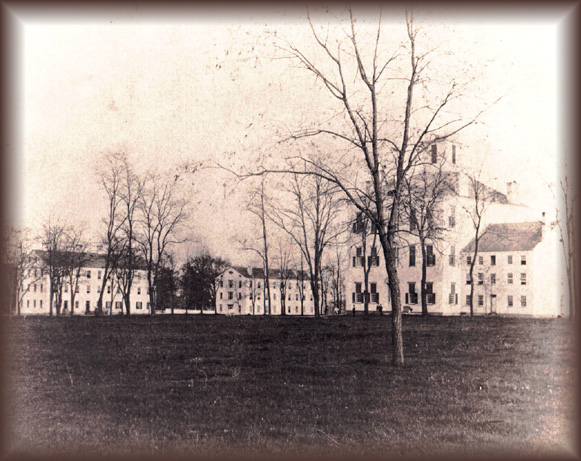 This first account is from the diary of Theophilus Cannon Hibbett. Hibbett was a student at Miami University from November 1851 to July 1854. After college, Hibbett went on to practice law and serve in the Confederate infantry. He later became a civil engineer and Justice of the Peace. His father inspired him to keep a diary of his days at Miami. Here Hibbett describes his travels from his home in Tennessee to Oxford. 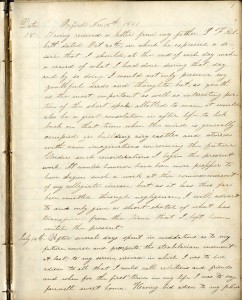 The Diary of Theophilus C. Hibbett

July 14, 1851
After several days spent in meditations as to my future course and prospects, the attrabiliarian [gloomy, melancholy] moment at last, to my sorrow, arrived: in which I was to bid adieu to all that I could call relations and friends and when for the first time in my life I was to say, farewell sweet home. Having bid adieu to my father’s family, in company with my brothers, James and Ira, I went to the railroad, there meeting Robt. Morrison, who was destined to the same place with myself, we took the cars to Nashville where we arrived about sunset, having a good deal of business to attend to we did not retire to rest until about mid-night. Weather exceedingly warm.

July 15, 1851
Left Nashville at 4 AM by stage for Louisville, coach crowded, weather warm, and roads very dusty; took breakfast just before arriving at Gallatin and after passing which place, the country gradually became more and more broken until it seemed, in comparison with Rutherford City, a mountainous wilderness. We took dinner at Scottsville, Allen Cty. Ky., which is a village of very little importance; from thence we traveled through Barren Cty. and took supper at Glasgow. The land of Barren Cty. is greatly superior to that of Allen about equal to that of Sumner Cty, Tennessee.

July 16, 1851
After traveling all the previous night, we stopped at a farmer’s cottage, whence, after having taken some refreshment we resumed our journey. The appearance of the country around Bardstown and indeed from that to Louisville is truly picturesque. Oh what a charming sight to one just emerging from the inarable wilds of interior KY!!! We arrived at Louisville at 6 PM which is a very beautiful city.

July 17, 1851
Rising very early I divert myself in traveling over Louisville until 11 AM at which time I set out by steamboat for Cincinnati.

July 18, 1851
Waked very early and, very much to my surprise, was landed on the Cincinnati wharf. After securing my trunk I went up in the city, but being very unwell from riding in the boat, I did not enjoy the pleasure of viewing the city very extensively, but as soon as possible, secured my passage, by way of Omnibus, to Oxford, where for the first time in my life I could freely like one of old say that I was a stranger in a strange land. This was to me the beginning of trouble, for when I found that the next college term did not begin until the last Monday in August, it increased my melancholy feelings very much to think that all this time was to be spent without having anything to do, and with which, to divert my mind, for the Professors were all absent and therefore I could have no particular study from not knowing in what class I would be put.

July 21, 1851
Rent a room in one of the college buildings and furnish it for a study room, though I took no very particular delight in staying in it during vacation as it was situated in a very large building in which there was no one except myself, which rendered it quite lonesome. Boarding at tavern. 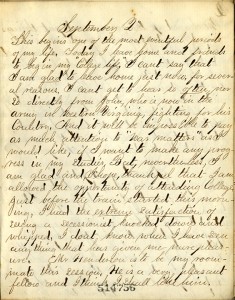 The Diary of Jerome B. Falconer

September 2, 1861
This begins one of the most eventful periods of my life. Today I leave home and friends to begin my “College life.” I cant [sic] say that I am glad to leave home just now, for several reasons. I cant get to hear so often nor so directly from John, who is now in the army in western Virginia, fighting for his Country. And it will be impossible to pay as much attention to “war matters” as I would like, if I want to make any progress in my studies. But, nevertheless, I am glad and, I hope, thankful that I am allowed the opportunity of attending College. Just before the train started this morning, I had the extreme satisfaction of seeing a secessionist knocked down and whipped. I don’t know when I have seen anything that has given me more pleasure. Mr. Henderson is to be my roommate this session. He is a very pleasant fellow and I think I shall like him.

We cleaned up the room and put things in order, and at noon I made my entrée at the Hugh’s house, famous among students for the good substantial meals which always await their hungry stomachs. In the afternoon we finished “fixing up,” and in the evening, at the special request of Mrs. Elliot, I took tea there with John Wood. Afterwards I went to the Campus and studied till ten o’clock and there resigned myself to the tender care of Morpheus.

We hope this semester starts off well for all Miami students. We look forward to seeing some of you in Special Collections during the course of this academic year.