For the Amusement of Youth: Early Board and Card Games in Special Collections 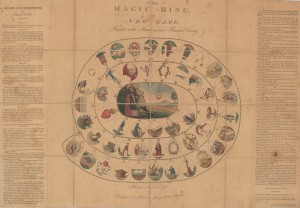 The Magic Ring, a hand-colored early nineteenth century board game

Whenever we can, we like to plan our exhibits to align with university-wide thematic programming.  Last year’s Summer Reading Program selection, Jane McGonigal’s Reality is Broken: Why Games Make Us Better and How They Can Change the World,  inspired many games and gaming-themed events across campus, including the Libraries’ very successful International Games Day celebration last semester.  This year’s gaming theme provided a perfect opportunity to highlight a subset of our Edgar W. and Faith King Collection of Juvenile Literature: historical games and books about recreational games.  Putting together an exhibit on any topic is an opportunity for me to delve deeper into the collections, to find “new” treasures, and to think about new ways that the material can be used in their current exhibit context and in the future for research and/or instruction. 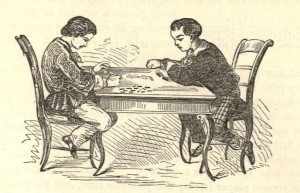 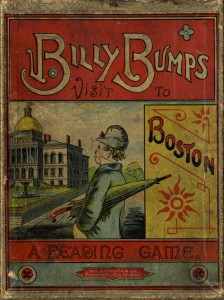 In doing research about the history of board and table games in the West to provide context and provide interesting label content for the physical exhibit, I discovered that our collection contains some wonderful examples of how the mass production of games changed over the course of the nineteenth century in England and the United States.  From the simple, but elegant, hand-colored educational board games published by specialized printing shops in England at the end of the eighteenth century to the mass-produced and attractively packaged games produced by giants of the gaming industry, like Milton Bradley, McLoughlin Bros., and Parker Bros., we have some great representative pieces.  It’s been great learning about the origins of modern board and card games and the “golden age” of game production. 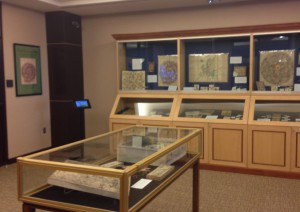 Figuring out how to display the board and card games in the physical exhibit cases in an appealing way, while being conscious of preservation concerns, was also a  great takeaway from this exhibit for me and my colleague, our Preservation Librarian Ashley Jones.  Ashley wrote about this in last week’s blog and it’s an interesting look behind the scenes of the exhibit process.  We’re also trying new things to make a visit to our exhibit gallery a more interactive experience, with the addition of an iPad kiosk equipped with a gaming app and coming soon: two playable “recreations” of board games circa 1800. 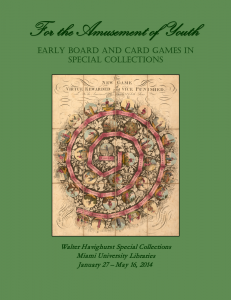 A brief description of the exhibit: Due to advances in manufacturing and printing technologies and an expanding middle class with more leisure time, the mass production of board, table and card games exploded in the 19th century. This exhibit traces the origins of today’s gaming industry, highlighting the products of the golden age of commercial game production in the United Kingdom, the United States, and beyond from the 1790s to the 1920s. Highlights of the exhibit include several hand-colored board games from England circa 1800, early games and puzzles produced by leading American game manufacturers, Milton Bradley, the McLoughlin Brothers, and the Parker Brothers, and an early French version of the popular magnetic fish pond game. 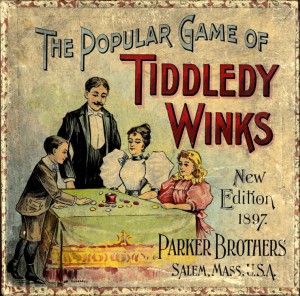 The Popular Game of Tiddledy Winks, 1897

A reception, free and open to the public, will be held on March 12 from 4:00 – 6:00 PM and will include a talk on games and gaming by Sarah Fay Krom, Visiting Assistant Professor in the Armstrong Institute for Interactive Media Studies, and a gallery talk by Special Collections Librarian and curator of the exhibit, Kimberly Tully.

Do stop by this semester and see some fascinating games from the past!