From the Stacks: Cosmos

This week I have chosen to highlight some of our astronomy books in Special Collections. The inspiration for this choice came from Neil DeGrasse Tyson’s current television show, Cosmos, A Space Time Odyssey. This series is a follow-up to Carl Sagan’s 1980s, Cosmos, A Personal Voyage. Tyson, like Sagan before him, is making the knowledge about our universe understandable and exciting to viewers. 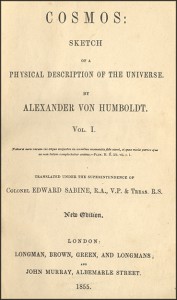 Alexander von Humboldt had this same desire; to write a popular scientific work that would create an appreciation for science and inspire scientific inquiry. The first volume of his work was published in 1845 and was called Cosmos. It became the biggest scientific bestseller of its age, and was eventually translated into most European languages. Humboldt began his five volume set at the age of 65 but died before he could finish it. Special Collections has three volumes from an 1855 edition, and the fourth volume from an 1860 edition.

One of our earliest books on astronomy is our copy of Sphaera Mundi by Johannes de Sacro Bosco. The author flourished around 1230 a.d. Wikipedia cites Sphaera Mundi as one of the most influential works on pre-Copernican astronomy in Europe. The manuscript was frequently copied and used by Universities for hundreds of years before the invention of the printing press. Our printed copy is dated 1501. This work was one of the most frequently reprinted scientific books of the 15th century. 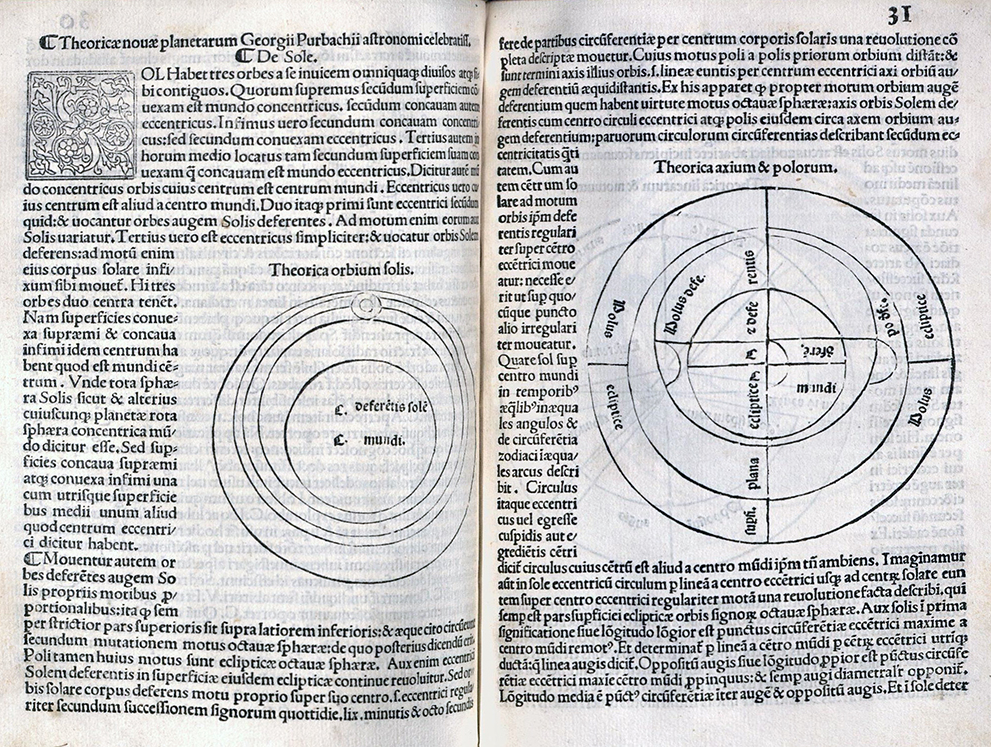 Another of our early astronomy books is The Celestial Worlds Discover’d, Or, Conjectures Concerning the Inhabitants, Plants and Productions of the Worlds in the Planets by Christiaan Huygens. 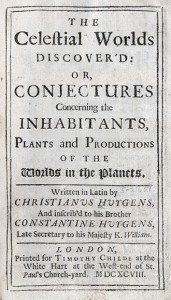 Huygens (1629-1695) was a Dutch mathematician, astronomer and physicist. He was the first to recognize the rings of Saturn and he discovered the Saturn moon, Titan. He observed and sketched the first known drawing of the Orion Nebula. Huygens also made pioneering studies of the dynamics of moving bodies, and was the leading advocate of the wave, or pulse theory of light. Our copy of this work was printed in 1698. 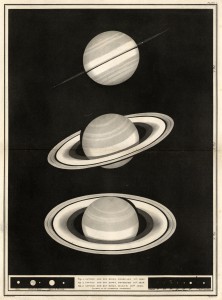 The illustration of Saturn on the left is from Richard Proctor’s 1865 volume, Saturn and Its System: Containing Discussions of the Motions (real and Apparent) and Telescopic Appearance of the Planet Saturn, Its Satellites, and Rings; the Nature of the Rings; the Great Inequality of Saturn and Jupiter; and the Habitability of Saturn. to Which Are Appended Notes on Chaldæan Astronomy, Laplace’s Nebular Theory, and the Habitability of the Moon; a Series of Tables with Explanatory Notes; and Explanations of Astronomical Terms. 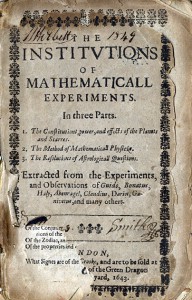 We have a very fragile copy of The Institutions of Mathematicall [sic] Experiments: In Three Parts ; 1. the Constitutions, Power, and Effects of the Planets and Starres ; 2. the Method of Mathematicall Physicke ; 3. the Resolutions of Astrologicall Questions. I could find very little information about this book. Our copy of this book was printed in 1643 in London. 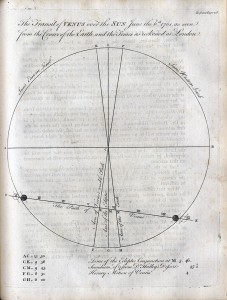 The last book that I want to single out is The History of Astronomy: With Its Application to Geography, History, and Chronology; Occasionally Exemplified by the Globes by George Costard. Our edition was printed in London in 1767. This is the work for which Costard is most known. There are numerous drawings throughout the book. The author’s preface indicates that this work was intended primarily for students.

If you search our collections for astronomy your search will produce eighty-nine titles. Nine of those titles are from our 1841 Collection, the extant books from Miami University’s earliest cataloged library. I mention this because Miami University had one of the earliest Observatories in the United States. The observatory was erected in 1838 and survived for a year or two, until students destroyed the building. The stone pier which was erected to support the telescope still stands today in front of Bishop Hall. It is possible that some of our books may have been used by those early Miami astronomers.

I hope that you will visit Special Collections to see some of these early works on astronomy.