This week’s post is by a guest writer, John Bickers.

My name is John Bickers and I’d like to tell you a little bit about myself. I’m currently a senior at Miami University as well as a citizen of the Miami Tribe of Oklahoma. As an employee of Special Collections I work solely with the Myaamia Collection and any other materials related to Myaamia people. My current positions was created by Special Collections and the Miami Tribe of Oklahoma in order to organize the materials housed here at Miami University and make them more accessible to Tribal members and other researchers that may be interested.

I was invited to contribute a post this week about the Myaamia Collection, a project that I have been working on for over a year now. In a collaboration between the Miami Tribe of Oklahoma and Miami University many texts relating to the tribe are stored here at Miami University. In addition to published materials, the Collection includes three manuscript collections donated by different individuals: the Turtle-Wells Family Papers, the Godfroy Family Papers, and the Luke Scheer Papers. The former two are Myaamia families that still exist today and the latter was an amateur historian who collected many documents related to Myaamia and other Native peoples. 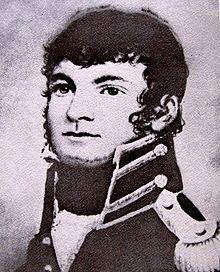 The Turtle-Wells family descends from a Myaamia war leader Mihšihkinaahkwa, also known as Little Turtle, and his son-in-law Eepiihkaanita, also known as William Wells (pictured to the left). Mihšihkinaahkwa and Eepiihkaanita were Myaamia men who fought in the Northwestern Indian Wars of the 1790s and after the Treaty of Greenville (1795) became advocates for peace with the Americans. This particular collection mainly contains documents created by or pertaining to Eepiihkaanita’s son-in-law James Wolcott and his son William Wells Wolcott. Soon after James Wolcott’s marriage to Eepiihkaanita’s daughter, Amehkoonsihkwa, or Mary Wells, the family moved to the area of Toledo, Ohio. Both James and William worked as lawyers as well as holding other political positions. The largest section of this collection is a legal document created by William Wells Wolcott in 1894. By this time their family had been so geographically separated from other Myaamia people that they had been removed from the tribal rolls as citizens. The purpose of this document was to establish their ancestry as Myaamia people and convince the United States government to re-add the family onto the Myaamia annuity rolls and give them the money due to them as Myaamia people. 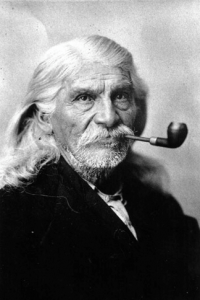 The Godfroy Family Papers have a special meaning for me. My grandfather, Kenneth Hunter, and I donated this particular collection. It primarily contains documents that were in the possession of his grandfather, Waapinaakikaapwa or Gabriel Godfroy (pictured at right). As an adult, Waapanaakikaapwa was a prominent Myaamia leader in the area of Peru, Indiana. As a leader he often represented Myaamia people in legal situations. For example, one document is a legal document signed by several Myaamia people giving power of attorney to a couple Myaamia people, including Waapanaakikaapwa.

Along with documents that relate directly to my family, there are also several documents relating to the descendants of a Myaamia leader Pinšiwa, aka Jean Baptiste Richardville. Pinšiwa was the nephew of Mihšihkinaahkwa and succeeded his uncle, Pakaana as akima (leader) of the Myaamia village of Kiikayonki, now known as Fort Wayne. How exactly these documents came into the possession of my grandfather is currently unknown. Waapanaakikaapwa’s elder brother, James R. Godfroy, married Maankoonsahkwa or Archangel Richardville, the granddaughter of Pinšiwa, and his son Šiikwia, or James M. Godfroy, married a descendant of Pinšiwa. It’s possible that these documents came into my family through those channels, but it is presently unknown.

The final collection is half of a collection of work by amateur historian, Luke Scheer, the other half residing in Miami, Oklahoma in the Myaamia Heritage Archives and Museum. These documents are compositions of many primary and secondary sources by Mr. Scheer and organized either chronologically or by family group. His goal was to create a book regarding the descendants of Mihšihkinaahkwa and his sister Tahkamwa, the mother of Pinšiwa. To this end, he also wrote letters to many Myaamia people that descended from these individuals from across the country. This collection then records the words and thoughts of Myaamia individuals from the mid 20th century who may have descendants alive today that never knew this people. As such, it’s a great resource for contemporary Myaamia people to learn more about their families.

I will be graduating this May with a major in History and a minor in Linguistics. Then this fall I will be attending the University of Wisconsin-Madison’s Ph.D. program in Linguistics. At the moment both the Turtle-Wells Family Papers and the Godfroy Family Papers have completed finding aids online and the Luke Scheer Papers will soon follow suit. By the time I graduate I plan to have all our collections stored in the Special Collections organized within the Myaamia Collection. Then as new materials are added to the collection in the future, they will have a pre-existing system that they can be organized into. I have been given a remarkable opportunity at Special Collections and I am honored to have received it. I have been able to do work and go through materials here that I never thought I would. I am very humbled to have the privilege of working with this collection and the people of Special Collections.