My Life as an Intern: More Fun With Exhibits

Hello, my name is Candace Pine – current intern here in the Steward and Sustain department – and I have something fun to share with you today. Recently, I discovered the English Toy Theatre collection that is housed here in Special Collections, and I fell in love with it. And, being the theater aficionado that I am (side note: buying those Broadway season tickets for the Aronoff Center was one of the best decisions I ever made!), I couldn’t help but want to show off the Pollock’s Toy Theatre as soon as I found it. So I decided to create a little exhibit for it in our reading room. Unfortunately, the wooden theater set that we have is too large to fit in the display case, but I was able to incorporate photos I took of the theatre (with set dressings from the play Treasure Island) into the display I created. So I’m still very happy with how things turned out. And if you want to check out my display in-person please feel free to stop by the reading room! 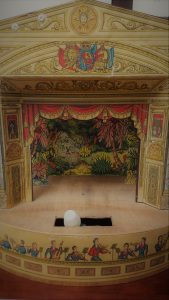 Close up of set dressing from Treasure Island

During the 1800s, Benjamin Pollock sold the Toy Theater as a craft hobby for children. Each toy theater play came with printed sheets that featured characters and settings for that particular play, which children would cut out and use to stage the plays in little wooden theaters. Each toy theater play set even came with a short script for the children to use to act out the story.

Interest in Toy Theater eventually waned, with Pollock being one of the last Toy Theater merchants. After his passing, his inventory of printed sheets and printing plates was purchased by Marguerite Fawdry. She used the materials to found the Pollock’s Toy Museum in the 1950s, and the museum still exists in London to this day. 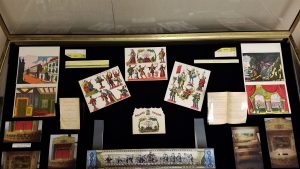 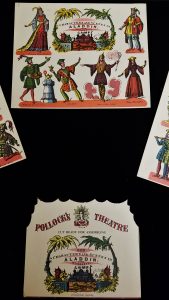