As of Friday April 16, 2014, the portal to our digital collections is now http://digital.lib.miamioh.edu/. 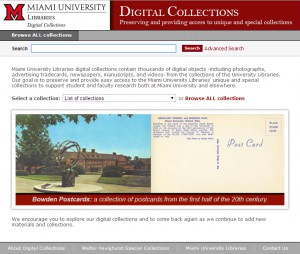 On behalf of Special Collections and the Center for Digital Scholarship, I am excited to announce the launch of our new digital collections portal. The new website is the end result of a long migration process of collections divided across instances of DSpace and CONTENTdm version 4.3 into a single, up-to-date instance of CONTENTdm 6.6. In addition to a variety of new features, the new instance is based on a significantly improved platform to allow for better searching and viewing of the items in our digital collections.

In total, our digital collections hold roughly 90,000 items, shared between over two dozen collections. These collections include:

The migration project began over a year ago and was spearheaded by John Millard, the Head of the Center for Digital Scholarship, and Elias Tzoc, the Digital Initiatives Librarian. From Special Collections, I have been collaborating with them to migrate and update the information about our collections that have been digitized. The project had several stages, each with their own unique set of challenges, including coordinating import/export tools from different platforms, updating image files to current standards, and preparing for a seamless-as-possible transition to a new platform.

This migration also comes ahead of Miami University’s domain name overhaul – migrating from the muohio.edu domain name (which will be defunct June 1st of this year) to the newer MiamiOH.edu. As a part of this, we are working to ensure that citations to our digital collections elsewhere on the web are ready for the migration and domain name change. One of the biggest current challenges in this is updating the links in our Flickr collections that lead back to the full objects and metadata records in CONTENTdm. Earlier this year, Miami University Libraries’ digital collections officially joined the Flickr Commons. Since then, I have been tracking the changes in views of both our Flickr account and their comparable collections in CONTENTdm. I have been thrilled to note the significant increase of both, but it has become clear to me that when it comes to access, there is no competition – the increase of views of the Bowden Postcard Collection Online in CONTENTdm is outnumbered fifteen times over by the views on Flickr. While the Flickr collection only shows the front of the card and a limited version of the metadata found in the CONTENTdm collection, the number of views is undeniable evidence of the importance of social media platforms for access in the modern world of information. 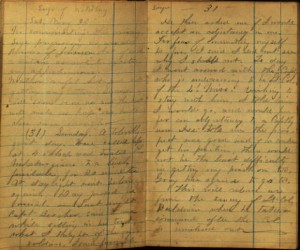 Page from Thomas B. Marshall’s diary

Another exciting part of this migration is the relaunch of our Civil War Diaries online collection. These diaries include three kept by Miami students and three by local Ohio community members who took up arms to fight for the Union. The diarists, all of whom served as members of the Ohio Volunteer Infantry, record their impressions and experiences on a variety of topics, including their interrupted college studies, the daily life of a soldier, military engagements and news from the home front. In the near future we will be also relaunching our digitized Samuel Richey Collection of the Southern Confederacy, as well as digitizing and making available new materials related to the American Civil War. 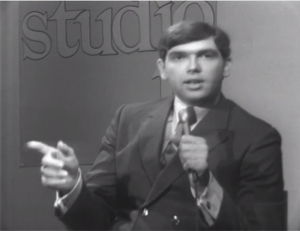 Finally, I am pleased to announce the completion of our newest digital collection: the Studio 14 Archives. This collection features digitized copies of the variety show produced by Miami students under the oversight of Dr. Bill Utter, from 1968-1970. The two-inch wide quadruplex videotape originals were kept by the show’s producer, Miami alumnus Rick Ludwin, who had them digitized and donated them to Special Collections so that we might be able to make them publicly available online. Special Collections continues to enjoy an ongoing relationship with Mr. Ludwin, who spoke at Special Collections’ first Annual Lecture Series. In addition to being a Miami alumnus, Rick Ludwin was also VP at NBC, where he is remembered for backing a new show called Seinfeld. The Studio 14 episodes in this collection feature a wide range of sketch comedy, musical performances, and famous guests. Happy viewing!