The Golden Age of Book Illustration 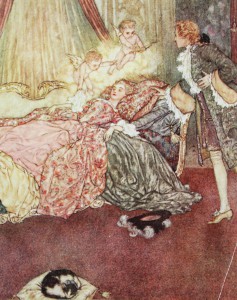 The Walter Havighurst Special Collections has a great collection of Children’s Literature, and since I began working here in June I have found myself outright bewitched by some of the illustrations I’ve seen.  In fact, materials from the “Golden Age” of book illustration (from about 1860 to 1930) in particular have really captured my imagination, and so I could not think of a better inaugural blog post than a few paragraphs about this new-found passion.

I had heard of artists like Edmund Dulac and Arthur Rackham before; Rackham, after all, famously illustrated the first edition of Peter Pan in Kensington Gardens, and Dulac’s sumptuous illustrations for The Arabian Nights featured in a children’s book I myself owned many years ago. 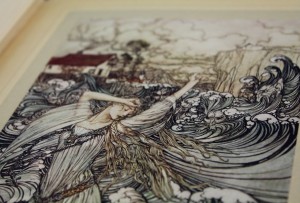 But even these artists who already existed on my periphery surprised me when I saw their work in person.  In the early 20th century, it wasn’t unusual for an artist like Rackham to have his illustrations featured in large “deluxe” editions, particularly before the outbreak of World War I when materials were less expensive and there was a greater market for such luxuries.  For me, seeing these illustrations so carefully inserted into the text, often protected by fine sheets of glassine, helped me realize what treasures these books really are. 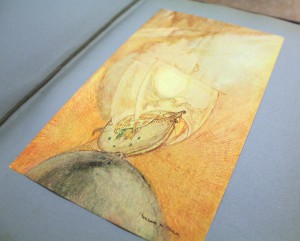 Illustration from William Timlin’s The Ship that Sailed to Mars, 1923.

Of course, a new appreciation for familiar artists is only part of the story.  I also began to encounter new artists from the era, people like Paul Woodruffe (a man primarily known for his stained glass work in places like St. Patrick’s Cathedral in New York), William Timlin, and Kay Nielsen, and their works are no less captivating.

William Timlin’s The Ship that Sailed to Mars is filled with large and brilliant illustrations, most of which feature images of the titular ship traveling through the cosmos.  Timlin’s story itself has perhaps not aged as well as it could have; the text carries a rather explicit colonialist message, which isn’t exactly surprising considering Timlin spent almost all of his life living in South Africa.  But the book itself is stunning regardless, printed in Timlin’s own calligraphy and featuring more than 40 full-color illustrations. 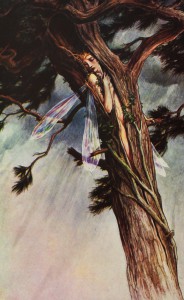 Woodroffe’s Ariel, from a 1908 edition of Shakespeare’s The Tempest.

Likewise, Paul Woodroffe also produced some beautiful and memorable work during this period, though his illustrations are sadly little remembered today.  Woodroffe’s work for Shakespeare’s  in 1908 is a particular favorite of mine.  It depicts an androgynous Ariel as a lovely and expressive fairy and generally emphasizes the whimsical and playful aspects of the character.  Woodroffe’s training in stained glass also shows through in his work on this book, with strong lines, delicate colors, and clear, expressive faces all see heavy emphasis. 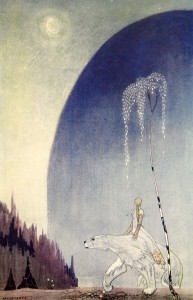 One of Nielsen’s illustrations from a 1922 edition of East of the Sun and West of the Moon.

Finally, I find Nielsen’s work in particular to be captivating, and I’m not alone on that note; three years ago, our own Preservation Librarian Ashley Jones made a post about his work.  Nielsen’s art is sometimes moody and subdued, and other times frantic and bright.  Whatever the story calls for, Nielsen seems able to convey that feeling perfectly.  The difference in tone between his work in East of the Sun and West of the Moon (1914) and The Twelve Dancing Princesses and Other Fairy Tales (1923) is undeniably drastic, but Nielsen’s unique style remains consistent. 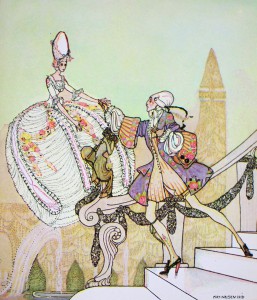 One of Nielsen’s illustrations from Twelve Dancing Princesses and Other Fairy Tales, 1923.

These artists were all new to me, and I’m sure that as I come to learn more about the collection–and as the collection grows–I will discover even more illustrators from this time period whose works capture my imagination.  I would also like to encourage everyone to stop by Special Collections and take some time to explore these works with me! 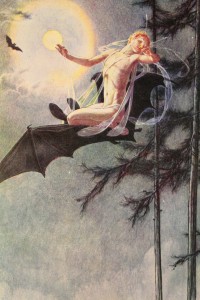