The March on Washington for Jobs and Freedom 1963 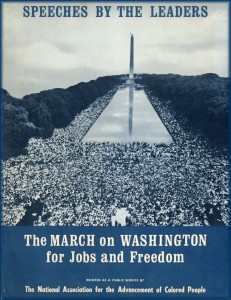 In honor of the fiftieth anniversary of The March on Washington we want to call attention to our copy of Speeches by the Leaders: The March on Washington for Jobs and Freedom. This publication was printed by the NAACP in 1963 and contains the text of many of the speeches delivered at this event. The speakers included in this booklet are: A. Philip Randolph, Roy Wilkins, James Farmer, Rev. Eugene Carson Blake, Rabbi Joachim Prinz, Whitney M. Young, Rev. Martin Luther King Jr., Mathew Ahmann, John Lewis, and Walter Reuther.

Along with the text of the speeches this program includes an opening two page introduction titled:  Statement by the heads of the ten organizations calling for discipline in connection with the Washington March of August 28, 1963. This statement is followed by the ten names of the speakers. 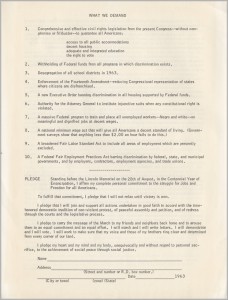 One of the statements for the Washington March is that “it will be orderly, but not subservient. It will be proud, but not arrogant. It will be non-violent, but not timid. It will be unified in purposes and behavior, not splintered into groups and individual competitors. It will be outspoken, but not raucous.”

The final page in the booklet is called What We Demand and lists ten numbered demands followed by a commitment pledge with a place for signature and address at the bottom. The Civil Rights Act of 1964 and the Voting Rights Act of 1965 reflected the demands of the march.

We invite you to visit Special Collections to read the text of the speeches that were given on that special day fifty years ago.