A Student’s Appreciation for His Teacher 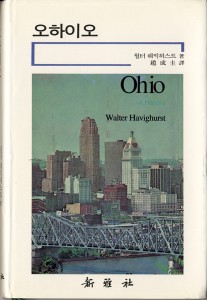 As I struggled for a topic for my blog post this week, I serendipitously found my subject in a small stack of Walter Havighurst’s books that were sitting on a booktruck next to my desk. There I discovered a Korean translation of Walter Havighurst’s Ohio: a bicentennial history. After reading the inscription in the book I knew that this was what I was looking for.

The translation was made by Sungkyu Cho, a former student of Dr. Havighurst, and was published in 1987. Dr. Cho was a member of the Department of English Literature at Yonsei University in Seoul, Korea. He had been a student at Miami in the 1960’s and had worked as an assistant in the library, back when the library was in Alumni Hall. The inscription in the book reads:

Dear Dr. & Mrs. Peterson:
This is a translation of Dr. Walter Havighurst’s Ohio, which was originally published in 1975. He completed it when he was 75. In order to pay my respect for his work, I translated it because I liked it and primarily because he dared to write Ohio when he was 75. “Who will read the history of Ohio in Korea,” asked some Koreans?” It did not bother me at all. As long as Ohio is published in Korean, I am most happy.

I was struck by the devotion and respect that this student had showed to his teacher by undertaking the task of translating this book. Dr. Havighurst’s handwritten note reproduced in the front of Cho’s book is also touching:

This Korean Version of OHIO is the work of my former student and cherished friend Sungkyu Cho of Yonsei University February 1985 Oxford, Ohio

In a letter to Helen Ball, the former Curator of The Walter Havighurst Special Collections, Dr. Cho writes of Havighurst:

I always hope that all the honors will be given to him for his achievements as a dedicated regionalist in the Middle West. It is through him that I have come to learn to cherish a dedication to life.

Walter Havighurst visited Sungkyu Cho in Seoul, Korea and lectured there in the late 1970’s. In October 2008 Professor Cho returned to Miami University and visited Special Collections. We invited him to turn a page of our Bhutan book, which was on exhibit at the time of his visit. 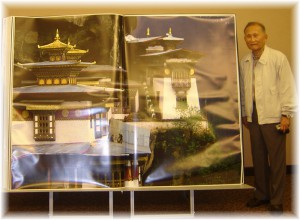 Dr. Cho and the Bhutan book

Discovering Cho’s book last week was special. It brought back special memories of Walter Havighurst, and of Dr. Cho’s visit to Special Collections. It also led me to discover just how important Walter Havighurst had been to his student, Sungkyu Cho.