“Communism is the youth of the world…”: The newest addition to the collection of Russian materials 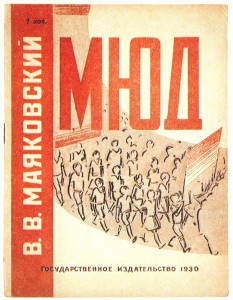 The most recent Russian acquisition in Special Collections is “MIUD” by Vladimir Mayakovsky, written in 1926 and published in 1930 by Gosudarstvennoe izdatel’stvo. It is a short children’s book in verse in the typical Mayakovsky style: bold, dramatic, and categorical. The book is dedicated to the International Youth Day, a socialist holiday, and is a perfect example of the unapologetic worship of the communist party and Lenin in particular. The first verse of the book can be loosely translated as: “Our path is chosen by Lenin, all others are twisted and filthy. Let’s only be green in years, but red in actions and life.” The World Youth day was celebrated by socialist youth between 1915 and 1945, at which point it was taken over by the newly formed World Federation of Democratic Youth and was moved to November 10. 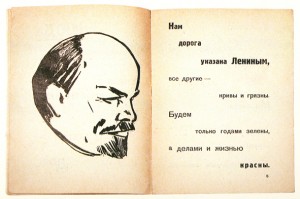 In addition of being a wonderful example of socialist propaganda and Soviet children’s literature in the 1920s and 1930s, it is a milestone in Mayakovsky’s path as a poet and a citizen. Vladimir Mayakovsky is one of the most controversial figures in Russian and Soviet history, art, and poetry. His contributions to the art of poetry are indisputable, as is his betrayal of himself as a citizen and of his closest friends.

Mayakovsky was a part of the group of futurists in 1910s and 1920s with the reputation of the strongest and most humane among them. His was possibly the most narcissistic of them, as well (he occasionally mentioned his good looks in his poe 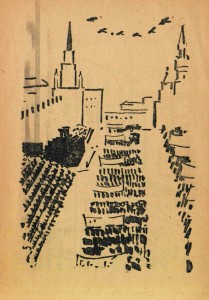 ms and took countless portraits and photographs of himself). He worked really hard on his appearance, of which he was very proud, including training his facial muscles to achieve a certain look, determined and almost angry. According to his contemporaries, he also practiced flashing his eyes. Everything about him was dramatic, from his carefully perfected gait, gestures, and facial expressions, to his poetry. There is, however, speculation by one of his friends, Vsevolod Meyerkhold that his arrogance and confidence was a sort of fragile armor. 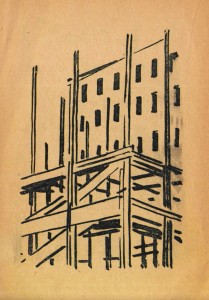 Mayakovsky was a devoted communist, even before the revolution, which cost him his enrollment in a prestigious art academy. He welcomed the revolution of 1917 enthusiastically and embraced it not only as political and social revolution, but a great art revolution, as well. His idealism was strong through the 1920s, especially after being noticed first by Maksim Gorky and then by Lenin himself and identified as the correct type of poet for the new Soviet Union. The reality of Marxism-Leninism proved to be very different from Mayakovsky’s ideal and he became slowly disillusioned in the regime by mid-twenties. By that time, though, he was already enjoying great power, fame, freedom to travel and became trapped in his status as the official poet of the Soviet Union. The status required him to compose patriotic and capitalism-denouncing poetry, which became less sincere with each poem, and less talented with each book. The political situation became dramatically worse with Lenin’s death in 1924 and Stalin’s rise, which meant that Mayakovsky’s sacrifice of personal integrity was no longer enough and his freedom required selling out close friends and his favorite city, Paris, every landmark of which he disfigured in countless poems in order to be able to go back there. Mayakovsky’s contemporary and close friend, artist IUrii Annenkov, who was a loyal and understanding friend despite becoming one of the poets victims sees Mayakovsky himself as a victim and blames the Soviet political realities in his tragic and dramatic suicide in 1930, a few months before the publication of “MIUD.” Annenkov recounts his last conversation with Mayakovsky in Paris, when Annenkov tells him that he is not going back to the Soviet Union because he wants to rema 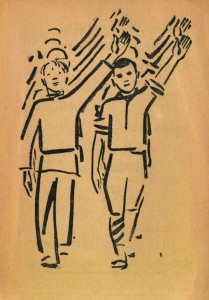 in an artist. Mayakovsky then darkly replies that he is going back because he is no longer a poet.

Mayakovsky was one of very few people whose fame was declared mandatory in the Soviet Union and who never fell out of favor, not even after his death. After his suicide, Stalin said in a speech: “Mayakovsky is and will remain the best and most talented poet of our Soviet epoch, and indifference to his memory and to his works will be declared a crime.”

In the context of Mayakovsky’s political convictions, personal drama, and controversial presence in Soviet history, “MIUD” is the perfect marker in his path as a poet.