From the Stacks: “Seventeen Portraits” by Iurii Annenkov 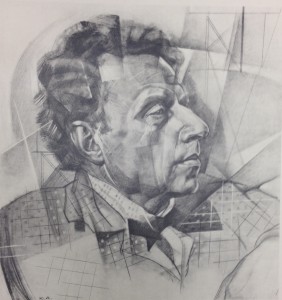 Spending time in Special Collections is always an exciting adventure for me. Just this week alone I was rewarded for just a few hours of cataloging and research with several treasures. A seemingly nondescript paperback, “Belogvardeiskii terror protiv SSSR,” reported on the trial of five people accused of “belonging to a monarchist terrorist organization and of entering Russia armed with intent to commit terrorist outrages and spy for foreign powers.” Not an unusual publication for 1928, but what was unusual is the signature inside, of general Aleksandr Kutepov, the leader of the anti-bolshevik Volunteer Army, who was kidnapped and executed two years later in 1930. He was mentioned in the book as someone who possibly orchestrated the “terrorist outrages.” Finds like this are always exciting, but there are also finds that start a real research adventure.

“Seventeen Portraits” by Iurii Annenkov is a very large and beautiful book of drawings. We’ve always known it was very rare and very special. Before this week I knew little about its story or the provenance of our copy, only that it has Annenkov’s bookplate in it, which probably means it belonged to him at some point. A recent interest in it by a graduate student prompted me to do a little research. 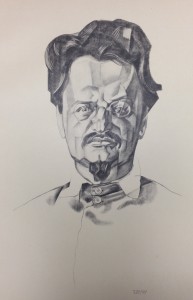 The album contains two portraits of Trotsky (Marxist theorist and the founder of the Red Army), four portraits of Zinoviev (revolutionary and head of the Communist International), and portraits of Meierkhold (symbolist theater director), Radek (Polish-Russian international communist leader), Antonov-Ovsienko (Bolshevik leader and diplomat), Skliansky (Trotsky’s assistant), Voroshilov (Soviet military officer), Zof (politician), Muralov (Bolshevik leader and member of Left Opposition), Enukidze (member of the Central Committee), Roy (Indian revolutionary, delegate to the Communist International), and Lunacharsky (first Soviet People’s Commissar of Enlightenment, art critic, and journalist). At the time of the album’s publication, 1926, all these people were prominent Soviet leaders, important and deeply respected. However, Stalin’s purges began shortly after and focused on “old Bolsheviks.” With the exception of Voroshilov, all Annenkov’s models were denounced and only two survived the purges. Roy was able to flee the Soviet Union and returned to India. Lunacharsky was appointed the ambassador to Spain, but died on the way there in France. Annenkov himself moved to Paris before the book was published and was removed from the Great Soviet Encyclopedia and was denounced in the Soviet Union even by his friend Mayakovsky. 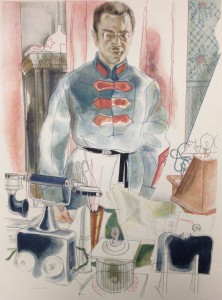 In his already riveting memoirs, Annenkov mentions the fate of the book. He recounts that two years after its publication, by order of Stalin, the album was removed from all libraries, bookstores, and even private collections. Not a small task given the size of the edition, there were 2,000 copies of it published. Because Stalin became a follower of Voroshilov, his portrait was removed from all copies and the rest of the book destroyed. With bitter sadness Annenkov remembers Lunacharsky’s introduction to the book, which promises the enjoyment of the edition by many generations. The book did not even survive to be enjoyed by even one generation. Annenkov also mentions that five copies of the book were given to him by the Soviet embassy in Paris upon publication, four of which he gave away to friends, keeping one for himself. 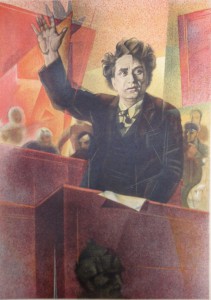 This is where my adventure became really exciting, since our copy of the book has Annenkov’s bookplate in it, signifying it as his personal copy. Next he mentions an “American bibliophile,” who approached him right after “deStalinization” in 1956, offering to buy his personal copy of the album. Annenkov refused, yet we still have his personal copy. Was this American bibliophile André de Saint-Rat, who collected or procured for the University Libraries the majority of its Russian treasures? Did he finally convince Annenkov to sell his copy or did he have to wait for his death in 1974? Did any of the other copies survive? My adventure continues as I dig deeper into the provenance of our stunning treasure. 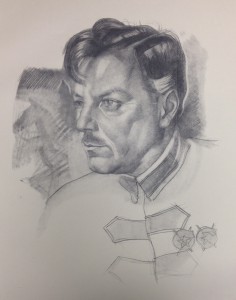 Klim Voroshilov, the only portrait in the portfolio that was not destroyed