The Ready Ones: American Children, World War II, and Propaganda 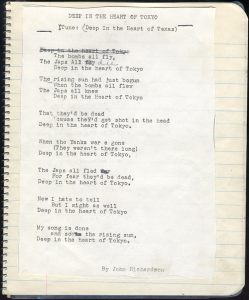 This Spring I had the opportunity as a graduate student to curate the exhibit, The Ready Ones: American Children, World War II, and Propaganda for my master’s thesis project. It will be on display from January 25th until May 16th. There will be a public reception on March 17th at 4 pm. 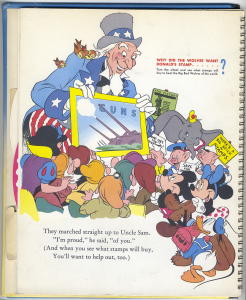 From: Walt Disney Productions, and Chester S. Williams. The Victory March; or, The Mystery of the Treasure Chest. New York: Random House, 1942.

This began as an idea for a class assignment. After viewing the materials in Special Collections and hearing stories from community members, it became my thesis. The exhibit tells the history of World War II and the lasting affect of propaganda on children through objects from the past and the memories of participants like Don Kallander. “As a twelve or thirteen-year old kid it seemed like you were really doing something, [even though] sometimes it did not feel like very much,” remembers Don. Thousands of children like Don did their patriotic duty by collecting scrap metal, saving their dimes to buy war bonds, and doing whatever was “necessary” for the war effort. 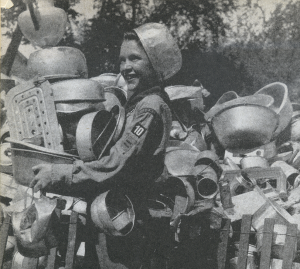 Motivated by propaganda, boys and girls also contributed thousands of hours and tons of material for ammunition, bombs, and military vehicles. “There wasn’t a question at that time about the fact that it was necessary, whatever that was,” says Ruthie Kallander. Propaganda flickered across movie screens and hummed over the radio. Schools adopted its values and taught their students that good citizens did whatever they could for the war effort. Parents read books that told their sons and daughters to buy war bonds and hate the enemy. Children absorbed it, but remained unaware of its influence. “Any child who went through that period it is a part of their personality,” says Barbra Wright Reed, “the hard work, the chores, and feeling part of a larger thing; a part of the country.” Children’s memories and their wartime actions show the power of propaganda’s messages and its affect on their lives. “We were not perfect,” says Barbra, “we were all victims of propaganda.”