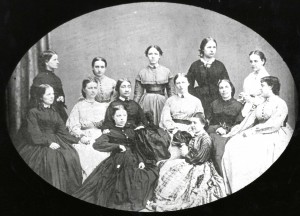 The archives lays claim to materials from the Board of Trustee records dating back to 1853, original material from Western College’s various Presidents (including Helen Peabody, Leila McKee and William Boyd), an impressive photograph collection and much more. Archival records may be accessed online through our ArchivesSpace instance.

In accordance with the vision of Miami University and the Mission Statement of University Libraries, the Western College Memorial Archives serves the university, local and international communities by collecting, preserving and providing access to primary resources on the culture and history of the former Western College for Women (1853-1974).

The Miami University Libraries welcomes the donation of materials appropriate to the mission and scope of the Western College Memorial Archives, as determined by the Archivist.

Western College was founded in 1853 as the ‘western’ representation of Mt. Holyoke in Massachusetts, with its dual vision of missionary zeal and low-cost yet high-quality education for women. Strongly supported by the leaders of the Presbyterian Church of Oxford, classes at the Western Female Seminary began in 1855 with Helen Peabody, a Mt. Holyoke graduate, as principal.
In 1888, Western was moving toward becoming accredited as a College and chose Leila S. McKee, a Wellesley graduate, as the new principal. In 1894, Western became “The Western: A College and Seminary for Women;” in 1904, the word “seminary” was dropped and Western became “The Western College for Women.”

For the next fifty years, Western remained a general liberal arts college, primarily under the presidency of William W. Boyd. With the arrival of President Herrick B. Young in 1954, an international focus began. Many international students and faculty were recruited, international travel seminars were instituted, and a global emphasis was added to the curriculum.

In 1970, an innovative interdisciplinary approach to education called “Freedom with Responsibility” was initiated under the leadership of President William C. Spencer. Another new direction was the decision in 1971 to admit men.